In this section teachers will find information about the content that is featured throughout the unit. The information can be used as a reference when questions about motion arise in  the classroom. The vocabulary in the lessons is described in very simple terms for use with middle school students  who are just starting to explore complex physics ideas. Students will learn more detailed information about this same content and the calculations behind  the concepts in later grades. For now, teachers focus on the simplified ideas  as a way to introduce the content  to students. 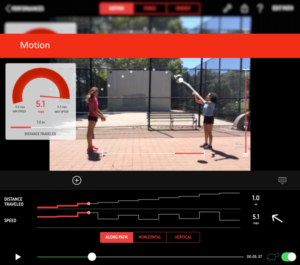 The laws of motion apply to everything that moves. In physics, motion is a change in position of an object with respect to time. Motion is typically described in terms of displacement, distance, velocity, acceleration, time and speed.

There are two kinds of motion: uniform motion and accelerated motion. Uniform motion describes objects that stay still or move in a straight line at a constant speed. For example, a book on a shelf has uniform motion, as does a car on cruise control or a spaceship traveling in deep space. Accelerated motion describes a state where the speed is changing over time. Some examples of acceleration include a book falling to the ground after a cat knocked it off of a shelf, a car when the driver presses on the gas pedal, or a rocket at blastoff.

Distance is the total amount of ground covered by an object in motion. The lessons in this unit focus on distance, but knowing the larger idea of displacement can be useful when describing motion in physics.

Displacement refers to how far an object has moved with respect to the point where the object started. Just like the difference between speed and velocity, displacement differs from distance by including a direction. For example, if a physics teacher walks forward 4 meters,
then turns around and walks back for 2 meters, the total distance the teacher traveled is 6 meters, but the teacher’s displacement is 2 meters forward because they only ended up 2 meters away from their starting point.

There are two common ways of talking about speed: as an average and as instantaneous. Average speed is calculated by dividing the total distance traveled by the total time it took for that object to travel the distance (s=d/t). Instantaneous speed, however, refers to the exact speed that an object is travelling at a specific instant.

Acceleration is the change in motion that occurs when an object changes direction, speeds up or slows down. Acceleration is calculated with the following equation:

Acceleration = change in velocity/change in time

The scientific definition for acceleration is not intuitive because in everyday terms, we think about acceleration as when we go faster. Think of a rollercoaster reaching the top of a hill, we are used to describing its increasing speed as it heads down the hill as acceleration. It is less common however to hear someone refer to the decreasing speed of the rollercoaster as we come to the end of the ride as an acceleration of speed. Well, less common unless you spend a lot of time in amusement parks with physicists! In physics acceleration can mean both speeding up and slowing down. Either way, you can feel acceleration whether you are braking sharply at a red light or picking up speed riding down a big hill on a bike. Physicists use the word acceleration instead of speeding because the phrase “speeding up” can mean both an increase in the number value of the speed and the speed increasing with time.