This section includes information about the content that is featured throughout the unit. Teachers can use the information as a reference when questions about forces arise in the classroom. The vocabulary in the lessons is described in very simple terms for use with middle school students who are just beginning to explore complex physics ideas. Students will learn more detailed information about this content and the calculations behind the concepts in later grades. For now, it is recommended that teachers focus on the simplified ideas as a way to introduce the content to students. 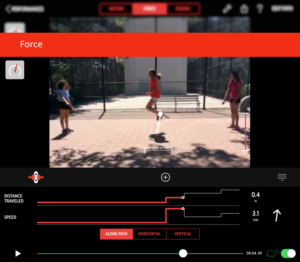 Force is an interaction between objects that can cause a change in the acceleration, speed or direction of an object. It is helpful to have students describe the forces that exist on objects that are interacting.

Some students may think a force is a property of a specific object. The amount of force an object exerts and experiences depends on the object’s mass and acceleration, but the force itself is not stored inside the object. Students’ tendency to talk about forces as being a part of an object comes from the way we talk about forces in everyday language. If a student is explaining a wrecking ball smashing through a wall as having force, they are likely thinking of force as a property of that wrecking ball rather than the force being present in the collision of the wrecking ball and the wall. Both the wrecking ball and the wall must interact in order for the forces to be present.

equilibrium so the forces are equal and opposite. An example of this would be a person holding a ball in their hand. The person’s hand is pushing up on the ball and the ball is pushing back down on their hand. Once the person releases the ball it is no longer in equilibrium. Gravity is pulling down on the ball and there is no opposing force so the ball will start to fall. The ball accelerates because of the unbalanced force of gravity pulling it down. Forces can be present even when the objects are not touching. Think about a ball flying through the air in a game of catch. The pull of Earth’s gravity on the ball will bring it back down to the ground. Planets in orbit experience forces that keep them in orbit without directly touching the star it is orbiting.

Newton’s Third Law is the least intuitive of Newton’s three laws of motion. Students often have difficulty understanding that all interactions involve equal forces. It does seem strange that we exert just as much force on the ground as the ground does on us when we think about how much more massive the Earth is than any single person. We can’t see any distortion or feel the pressure of our feet on the ground. When presented with the classic example of a book resting on a table, many students think that the table is just in the way of the book getting to the ground. Even if we can’t see it or feel it, forces are present in both directions. If an object is not moving, there always has to be equal and opposite forces acting on it. If there are unbalanced forces, there will always be motion. Equal and opposite forces are sometimes easier to think about in zero gravity environments, like outer space, where forces can be singled out. If an astronaut pushes the box, the motion and position of the box will change in accordance with the push, and the astronaut will also be pushed in the opposite direction from the box at the same rate.

The terms “push” and “pull” are sometimes used to describe how forces change the motion of objects. How much change occurs is related to how strong the pushes and pulls are.

Forces on the person jumping:

Other forces present in the act of jumping rope: