In this lesson, students return to the activity of jumping rope and explore the forces at play through the use of the app 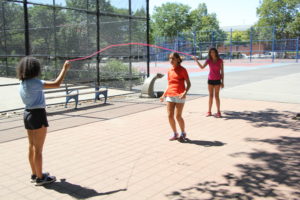 Using the force lens students will:

a) Students should circle the place where Amna’s hands are pushing against the chair.

c) The other forces exist, but we know there is an unbalanced total force Delenn is moving forward.

a) Students should circle the place where Amna’s hands are pushing against the chair.

c) The other forces exist, but we know there is an unbalanced total force Delenn is moving forward.

a) No, Amna is no longer exerting a force on the chair.

c) Friction from the ground is acting on the chair slowing it down. 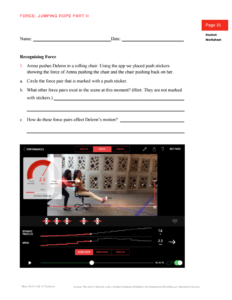 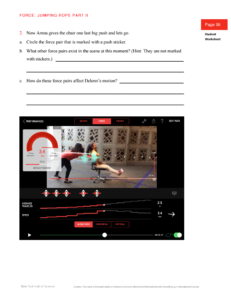 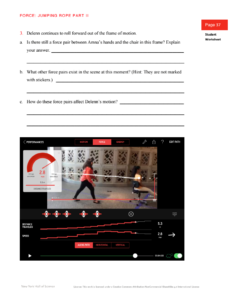 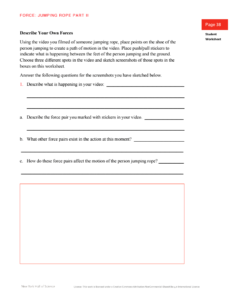 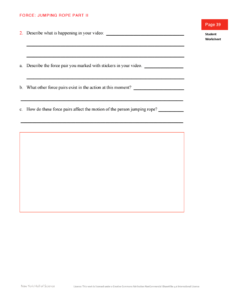 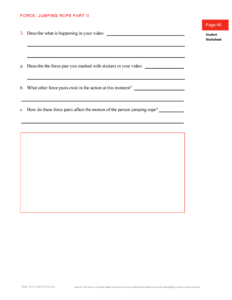 The purpose of this activity is for students to gain familiarity with annotating videos in the force lens with the Playground Physics App and to learn to describe force.

NEXT GENERATION SCIENCE STANDARDS
Crosscutting Concepts: Patterns
Graphs, charts, and images can be used to identify patterns in data.

PS. 5.1b: The motion of an object can be described by its position, direction of motion, and speed.

P.S 5.1c: An object’s motion is the result of the combined effect of all forces acting on the object. A moving object that is not subjected to a force will continue to move at a constant speed in a straight line. An object at rest will remain at rest.

With many devices, students may be broken up into teams to work collaboratively on their iPad to record, annotate and investigate their videos. We suggest having teams of three or four students. Suggestions for student roles in each time can be found in the introduction.