In this lesson, students look for patterns in their data and as a class compare/come to an agreement about the patterns that exist in the forces that act on a person who is jumping rope. 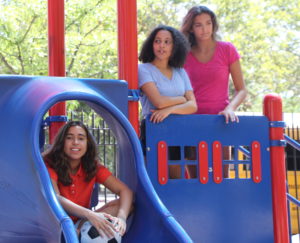 Using the force lens students will:

Below are some of the overall patterns in the forces on a person jumping rope that students may notice.

Forces on the person jumping:

Other forces that are present in the act of jumping rope: 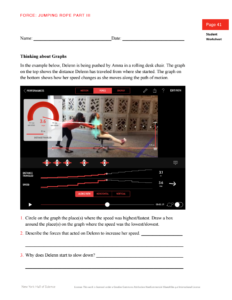 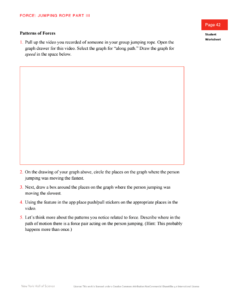 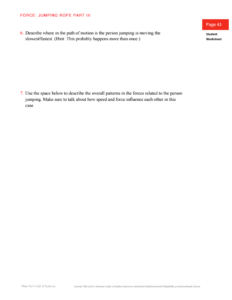 The purpose of this activity is to provide students experience interpreting the data from the graphs in the Playground Physics App and for them to identify the patterns that exist in the forces that act on a person who is jumping rope.

CCSS.ELA-LITERACY.SL.6,7,8.1: Engage effectively in a range of collaborative discussions (one-on-one, in groups, and teacher-led) with diverse partners on grade 6 topics, texts and issues, building on others’ ideas and expressing their own clearly.

CCSS.ELA-LITERACY.WHST.6-8.1.B: Support claim(s) with logical reasoning and relevant, accurate data and evidence that demonstrate an understanding of the topic or text, using credible sources.

PS 5.1q: According to Newton’s Third Law, forces occur in action/ reaction pairs. When one object exerts a force on a second, the second exerts a force on the first that is equal in magnitude and opposite in direction.

With many devices, students may be broken up into teams to work collaboratively on their iPad to record, annotate and investigate their videos. Teams of three or four students work well. Suggestions for student roles in each time can be found in the introduction.