This activity elicits student thinking about forces. Through the “four corners” activity, students are required to use evidence to support their argument. 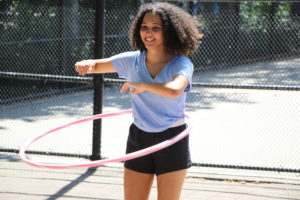 The Playground Physics app is not required for this lesson.

The best answer is Mark: The ball exerted a force on the club when the club hit it, but it wasn’t a big enough force to balance the larger force from the club. The ball will roll until friction slows it down. 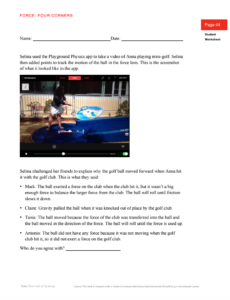 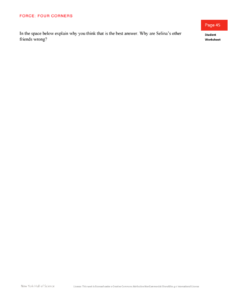 The purpose of this activity is for students to practice thinking through all of the forces acting on an object and what the resulting motion will be when forces are unbalanced. The “Four Corners” activity is designed to promote scientific reasoning and articulation of scientific thinking.

Students will use scientific reasoning to construct an argument and to explain data.

Crosscutting Concept: Patterns
Observed patterns of forms and events guide organization and classification, and they prompt questions about relationships and the factors that influence them.

CCSS.ELA-LITERACY.SL.6,7,8.1: Engage effectively in a range of collaborative discussions (one-on-one, in groups, and teacher-led) with diverse partners on grade 6 topics, texts and issues, building on others’ ideas and expressing their own clearly.

PS 5.1b: The motion of an object can be described by its position, direction of motion, and speed.

With many devices, students may be broken up into teams to work collaboratively on their iPad to record, annotate and investigate their videos. Teams of three or four students  work well. Suggestions for student roles in each time can be found in the introduction.