In this lesson, students revisit the writing they did at the beginning of the unit to add in more details and demonstrate all that they have learned about forces. 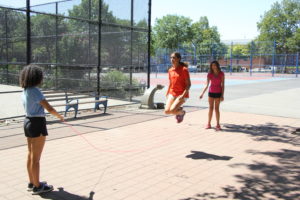 Note that the Playground Physics app is not required for this lesson. 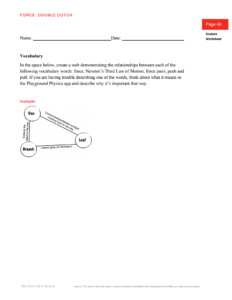 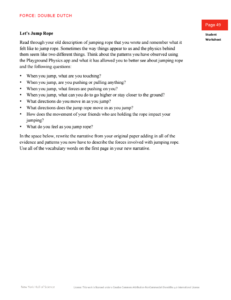 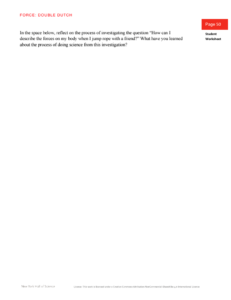 The purpose of this activity is to help students connect their initial lived experiences and ideas to their new knowledge about how physicists talk about forces.

The writing component of this lesson is designed as a formative assessment to show what students have learned about forces during the unit. Students should show an improvement in their abilities to describe forces, Newton’s Third Law of Motion, and Force Pairs.

Observed patterns in nature guide organization and classification, and prompt questions about relationships and the causes underlying them.

Engaging in Argument from Evidence

Construct; use and present oral and written arguments supported by empirical evidence and scientific reasoning to support or refute an explanation or a model for a phenomenon.

Scientific Knowledge is Based on Empirical Evidence.

Scientific knowledge is based on logical and conceptual connections between evidence and explanation.

CCSS.ELA-LITERACY.WHST.6-8.10: Write routinely over extended timeframes (time for reflection and revision) and shorter time frames (a single sitting or a day or two) for a range of discipline-specific tasks, purposes and audiences.

CCSS.ELA-LITERACY.WHST.6-8.2.D: Use precise language and domain-specific vocabulary to inform about or explain the topic.

PS. 5.1b: The motion of an object can be described by its position, direction or motion, and speed.

PS 5.1q: According to Newton’s Third Law, forces occur in action/ reaction pairs. When one object exerts a force on a second, the second exerts a force on the first that is equal in magnitude and opposite in direction.