Students create a mashup, hiding parts of their friend’s face within another image, and pose the question: What is the greatest fraction of a person’s face that can be revealed before figuring out who it is? What is the smallest fraction that can remain hidden so it is still recognizable? In comparing different mashups, students explore which fractional quantities are larger, smaller or equivalent. 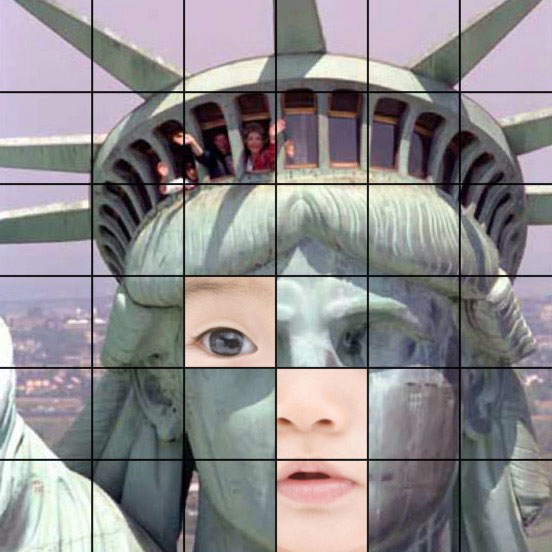 Have students open the app, and select “Make A Mashup.” To start, students need to choose two pictures to mash, one of an object and one of themselves.

Prompt students to share the mashups they made and what they had to do to achieve the effects they wanted. Ask students:

Examples of language and discourse to listen for as students engage with Fraction Mash:

Examine what fraction of the whole image their different facial parts are. The faces can be resized by zooming. How does this affect the fractions of each part (eyes, nose, etc.)? Is the eye 1/8 of the face? 1/10? etc. How much of your face can be hidden in such a way that you are still recognizable to your peers? How much can be revealed without someone figuring out and that it’s you? In this activity, the question of “how much” is answered in terms of fractional quantities of the whole picture. Students will use different grids to partition their pictures and select which parts of their faces to reveal. In sharing and comparing their final mashups, students will figure out what fractional parts of the faces are represented in their mashups and which fractional quantities are larger, smaller, or equivalent. For example, if one student used 4/16 of their face in their picture and another student used 1/4 of their face in their picture, who wins the challenge? Both since both are equivalent—1/4 of the whole.

NOTE: The concept of the “whole” is important to consider with Fraction Mash. For the purposes of this app, the “whole” is the picture itself – the image that fits within a frame. The parts of one picture combine with parts of another picture to make one whole picture: the mashup.

Students will use denominators, numerators, and various grid options to solve problems built around real world images. From this activity, students will be able to:

Create a set of mashups before class in which you hide faces of either popular (to your students) celebrities or students in the class in objects as shown in the example. Using an interactive white board or projector, talk through the fraction of the entire image that is “face parts” in comparison to the rest of the image. Discuss features of images, in terms of fractions, that allow faces to be successfully hidden. Then work as a class to create some new Hidden Face mashups.

This activity works well with students working in pairs. Have students take turns being the models and the photographer. This can lead to interesting investigations of fractions that have to do with the differing combinations for mashups.

To facilitate a fair challenge, have students send their mashups to you anonymously so the class is unaware who is in the photo mashups. Also encourage students to use object photos or people that blend best with their friend so they are unrecognizable. If you feel some students will be more recognizable than others regardless of fractional parts selected, you can offer students four preselected photographs that everyone has to mashup for the challenge.